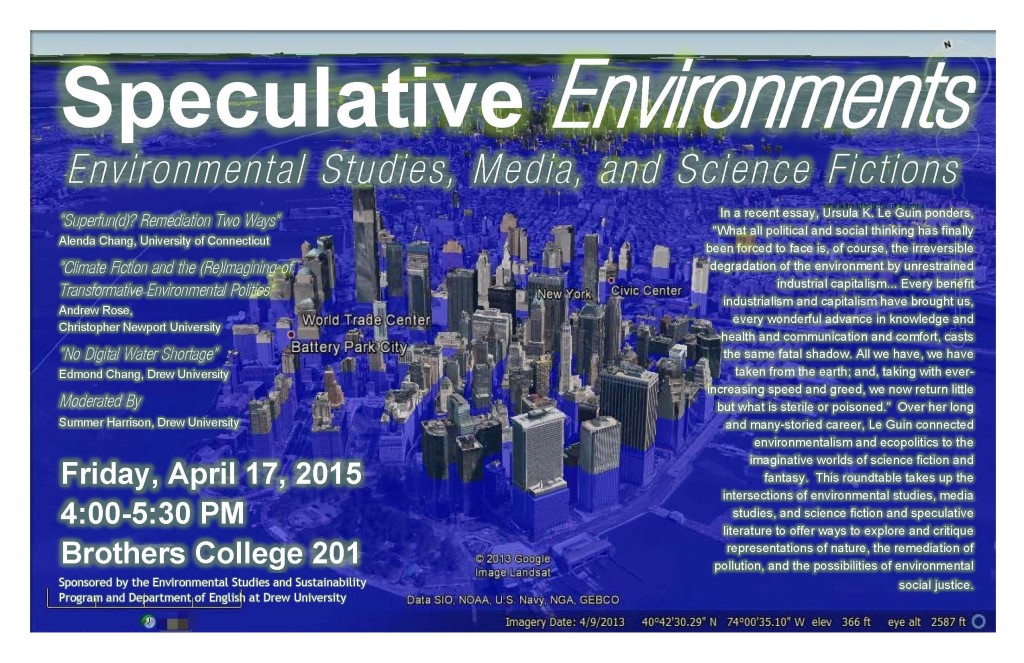 In a recent essay, Ursula K. Le Guin ponders, “What all political and social thinking has finally been forced to face is, of course, the irreversible degradation of the environment by unrestrained industrial capitalism…Every benefit industrialism and capitalism have brought us, every wonderful advance in knowledge and health and communication and comfort, casts the same fatal shadow. All we have, we have taken from the earth; and, taking with ever-increasing speed and greed, we now return little but what is sterile or poisoned.” Over her long and many-storied career, Le Guin connected environmentalism and ecopolitics to the imaginative worlds of science fiction and fantasy. This roundtable takes up the intersections of environmental studies, media studies, and science fiction and speculative literature to offer ways to explore and critique representations of nature, the remediation of pollution, and the possibilities of environmental social justice.  This roundtable discussion features:

The U.S. Department of Labor’s Bureau of Labor Statistics offers the following no-frills definition of environmental remediation on its “green jobs” portal: “the removal of pollution or contaminants from water (both ground water and surface water) and soil.” Here, “environmental media” are things like soil, sediment, groundwater, and surface water, and a wide array of treatment methods can be used, of physical, chemical, thermal, or biological origin. Meanwhile, most writing about “new” media in the wake of Jay David Bolter and Richard Grusin’s Remediation continues to regard media and mediation as things and processes found only within the pale of digital visual technology. In Bolter and Grusin’s well-known articulation of remediation, new media offer themselves “as refashioned and improved versions of other media” (15). My approach to environmental remediation proposes that living and nonliving bodies and places are themselves vital media forms; so too, our usual media are environments, which inevitably frame our understanding of the natural world. Specific examples to be discussed include the video game Journey and online sites and applications like the EPA Superfund web portal, NOAA’s Sea Level Rise viewer, and ifitweremyhome.com

Near the conclusion of Kim Stanley Robinson’s Science in the Capital trilogy, the newly elected U.S President suggests that the crisis of climate change will call upon human society to “become the stewards of the earth.”  President Chase, however, also admits “that we [will] have to do this in ignorance of the details of how to do it” (my emphasis, Sixty Days and Counting, 517).  In our discussion I hope to explore this challenge, as outlined by Chase, within the context of the following questions; what does it mean for humans to be “stewards of the earth” while simultaneously admitting we do not know “how to do it”?  What role might speculative fiction play in this socio-political process? In what ways will the narrative necessarily look different from traditional environmental concepts of stewardship and more recent capitalist conceptions of a green economy?  And, finally, how do contemporary concepts of material agency as theorized by Karen Barad, Jane Bennett and others, in which agency is seen as complexly distributed across human and non-human communities, impact human society’s understanding of, and ability to shape, the future?

In a recent Motherboard article entitled “Rendering Realistic Water Is Still Game Development’s Moby Dick,” games journalist Zach Kotzer opines, “When video games want to dazzle you, they don’t use dragons or giant bugs, because fantastical creatures don’t need to prove themselves. Rather, realism is the spectacle—our oceans, rivers, puddles and swimming pools shimmering in real time. Water comes up so often in graphical discussion it’s practically cliché.”  My provocation is to investigate and meditate on the very real world, real time fresh water shortage in the US and around the world in tension with the drive to animate, digitize, and perfect water in film, games, and other media.  How might we understand the push for more digital water as accidentally environmentalist?  How might we recover this digital “holy grail” even as digital technologies continue to drink up resources?  In other words, in the desire to imagine and imitate water, how might these mediums speculate on new and sustainable futures?

Please join us on Friday, April 17, 2015, from 4:00 to 5:30 PM in BC 201.  The roundtable hopes to think about, in the Le Guin’s words, how might science fiction and speculative media might offer “[y]oung people, people this society blatantly short-changes and betrays, are looking for intelligent, realistic, long-term thinking: not another ranting ideology, but a practical working hypothesis, a methodology of how to regain control of where we’re going.”

This program is sponsored by the Environmental Studies and Sustainability Program and Department of English at Drew University.

Alenda Y. Chang is an Assistant Professor in environmental literature and the digital humanities in the Department of English at the University of Connecticut (Ph.D. Rhetoric, UC Berkeley). Her work has appeared in Interdisciplinary Studies in Literature and Environment and Qui Parle, and her current project, Playing Nature, develops an ecological perspective on computer and video games.

Andrew Rose is a Lecturer in Environment Rhetoric and Literature at Christopher Newport University, a public liberal arts institution in Virginia. He received his PhD from the English Department at the University of Washington in 2013. His current book project, which explores contemporary theories of environmental materiality and their impacts upon environmentalism as a social movement, is entitled Towards a Posthuman Ecology: Political Subjectivity and Distributed Agency in American Literature and Culture. His article, “Insurgent Bacteria: Distributed Agency in Karen Tei Yamashita’s Through the Arc of the Rainforest,” is forthcoming in Interdisciplinary Studies in Literature and the Environment (ISLE).