It is a wonderful thing when your scholarly and avocational interests come together.  For me, during my time at the University of Washington, I have pursued critical and analytical approaches to games, particularly role-playing and video games.  I believe that video game studies will continue to grow in rigor and demand and will become an important facet in any study of new media, digital humanities, postmodernism, even literature.  I have incorporated gaming into my dissertation research, my pedagogy and course rationales, my public scholarship, and my intellectual community.  More specifically, I have developed ways to talk about games using cultural studies, queer theory, and new media lenses as well as close reading and close playing strategies for teaching (with) video games.  For more information, see:

In 2008, I was invited to join the organizing committee of the Critical Gaming Project (CGP) at the University of Washington.  Originally started by Terry Schenold as a clearinghouse for teaching with and teaching about video games, the CGP has grown over the years into an interdisciplinary “collaboratory” for video game studies, research, and pedagogy.  I worked with Terry Schenold and Timothy Welsh to revamp the CGP website into a blog to provide a more public face to the work being done on games at UW.  I regularly contributed gaming research news, commentaries, and course offerings.  Working with the Comparative History of Ideas department, the CGP organized a series of two-credit focus groups on critical approaches to video games.  I developed five of these CHID courses specifically on video games and two on other gaming forms like pen-and-paper RPGs and live-action role-playing games.

Because of our work, the CGP successfully garnered funding from the Simpson Center for the Humanities to organize a Graduate Interest Group (GIG) called Keywords for Video Game Studies.  I was the lead organizer of the Keywords GIG, which organized a series of public conversations and workshops to promote critical play and critical gaming.  Moreover, all of the GIG collaborators were named Humanities, Arts, Science, and Technology Advanced Collaboratory (HASTAC) scholars for 2010.  As of this year, the GIG has been renewed for 2011-12 and renamed HASTAC Scholars.

I continue to work with the CGP and its various projects.  Through the CGP and the Keywords GIG, I have learned how to enter into conversations in the digital humanities and video game studies, how to leverage technology and collaboration to promote my work, and how I locate myself as a public scholar, researcher, and teacher.  I have also gained useful experience in writing proposals, in working with an organization like the Simpson Center, and developing an online, academic presence.

The Critical Gaming Project (CGP) at the University of Washington is a collaborative, interdisciplinary working group and community of players dedicated to the critical study and teaching of games, primarily digital and social games. The CGP is committed to the idea that video games (and games in general) occupy an important part of our lives and media ecology, that games can be *both* “serious” and “fun,” and that games are necessary objects of inquiry and analysis. The CGP hopes to foster game research and pedagogy at the university level and to develop productive interactions between departments, disciplines, scholars, players, fandoms, and the general public.

To accomplish these objectives, the CGP maintains a collective blog and web archive, networks to like-minded programs and projects at other universities and institutions, develops original courses and focus groups on games at UW, promotes and publicizes gaming events on campus and beyond, and provides an intellectual and avocational space for scholars, teachers, and players to share their work and their interests. The CGP includes graduate students, undergraduates, and faculty.

Membership and participation in the CGP is ad hoc. The current organizing committee consists primarily of graduate students at the University of Washington, but anyone affiliated with the UW community may “join” the CGP and register as a subscriber of the Critical Gaming Project blog. For more specific roles, responsibilities, and privileges, please contact the CGP or attend a CGP meeting or event. 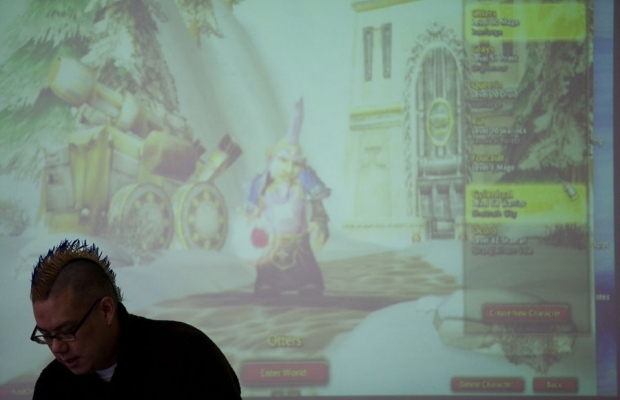 Since 2008, after joining the Critical Gaming Project, I have taught a number of courses on critical gaming.  First, working with the Comparative History of Ideas (CHID) department, I developed two-credit CHID 496 focus groups on video games and role-playing games.  These focus groups are designed for special topics, student-driven exploration, and seminar-style discussion.  According to CHID, “Focus Groups often begin when a couple of students want to do reading on a particular topic, and discuss ideas with others who share this interest…Focus groups allow students with common interests to create a space to discuss topics which may not be covered elsewhere in the UW undergraduate curricula. As with all CHID courses, all students participating in focus groups are expected to engage topics critically, respectfully, and from varying perspectives.”  Second, I have also designed a five-credit ENGL 207 class for the English Department called “Virtual Worlds & Video Games.”  ENGL 207 is an introductory cultural studies course and my class uses the occasion of virtual worlds and video games in literature, film, and new media to introduce students to the key concepts and terms of cultural studies.

I have learned a great deal about creating syllabi with video game texts, deploying digital media in the classroom, about developing new practices and pedagogies to teach games, and about collaborative teaching.  For example, when Timothy Welsh and I drew up our first class on Irrational Games’s blockbuster Bioshock, we wanted to engage the game’s use of Ayn Randian themes and theories about posthumanism and technolibertarianism.  However, from the first day, we met with immediate resistance from the students, who simply wanted to play the game and to talk about how to best beat the game.  Our attempts to connect the game to real world issues or theories was seen as “reading too much into things” and “taking the fun out of play.”  We realized that just because students like video games does not mean they are prepared or willing to treat them as objects of analysis (a fact that challenges popular notions of “digital natives”).  Therefore, our next focus group would foreground games with overt “messages” and goals.  The tensions and resistances of our Bioshock class became the very questions and inquiries for our “Why So Serious?” class on persuasive and propaganda games.  Putting questions of why video games are important and how do you approach video games critically resulted in a much more rich and successful class.  Finally, in this arc, we returned to Bioshock and taught a class on “close playing,” teaching students a methodology for critically looking at and playing games.  For more information, see the individual course descriptions and syllabuses linked below.