This past week, I was invited to Dr. Kevin Uhalde‘s HIST 1222: “Medieval History in Film & Literature” (Spring 2018) class to talk about and show (high) fantasy live-action role-playing games, in particular my game Archaea.  Like my visit to Dr. Dorothy Kim’s “Medieval Play” course at Vassar College last year, this opportunity came about because Dr. Uhalde discovered my interests in gaming, fantasy, LARPing, and teaching through play.  On Wednesday, April 4, I spoke about Archaea, how I got into live-action role-playing games (and my initial reticence), the different attitudes culturally (particularly in the US) toward fantasy versus science fiction, and why I created Archaea in the first place.  The students had watched the documentary Darkon (2006) and read Le Guin’s essay “Why Are Americans Afraid of Dragons?” and Fine’s “Introduction” to Shared Fantasy and Worley’s article “Vikings Were Not Nazis.”  These were some of the framing questions for the discussion:

Then on Monday, April 9, I had all of the students meet me on a small grassy area on campus–literally a flat, open, empty rectangle of grass sandwiched between a few campus buildings and a restaurant–to introduce them to actually playing Archaea.  Here the pedagogy of play, the pedagogy of LARPing manifests itself in action, in the ways students engage not only the rules (albeit simplified) but also the social setting, the space, the spectators.  There was not enough time to have them generate characters and get costumed up (though one young man decided to come dressed as a “Spartan” in forty-degree weather), so I just introduced them to the gear, to combat, and to a very basic adventure.  We started with a couple of two team battles to get them warmed up.  Then I split the group of about thirty students into an player characters and non-player characters.  I gave them very basic roles: fighter, rogue, mage, healer.  Then sent them on a short adventure with the premise that the player characters were told to investigate and deal with a group of “darklings” (the fraught, in-game term for demi-humanoids a la kobolds, goblins, orcs in other games).  Part of the adventure was to have players think about the term “darkling,” to think about race in fantasy worlds, and to think about the role of and mechanics of fighting, diplomacy, and narrative.  Interestingly (though not surprising), by the end of the class, the player character party had split into gendered camps with most of the men wanting to solve the situation through combat and with the women either abstaining entirely or wanting diplomacy.

I think the students got into it by the end even as we attracted onlookers.  (Hopefully, some of them will enroll in my Critical Approaches to Fantasy class in the fall.)  Again, getting into the swing of things (pardon the pun) does require you give up some of the fear, worry, insecurity about play.  That is something I am thinking about more and more, particularly via ideas of transfer and confidence-building in classrooms.  (Unfortunately, we could not coax Dr. Uhalde into playing.  Perhaps next time!)

I had a great time, and I hope I piqued some curiosity, interest, and reflection on the part of the HIST 1222 students.  The demonstration reminded me of how much I enjoy playing and miss running Archaea.  It was an honor to introduce most of these students to LARP, to get them to experience it first hand.  Thank you to Dr. Uhalde and to the class for inviting and welcoming me. 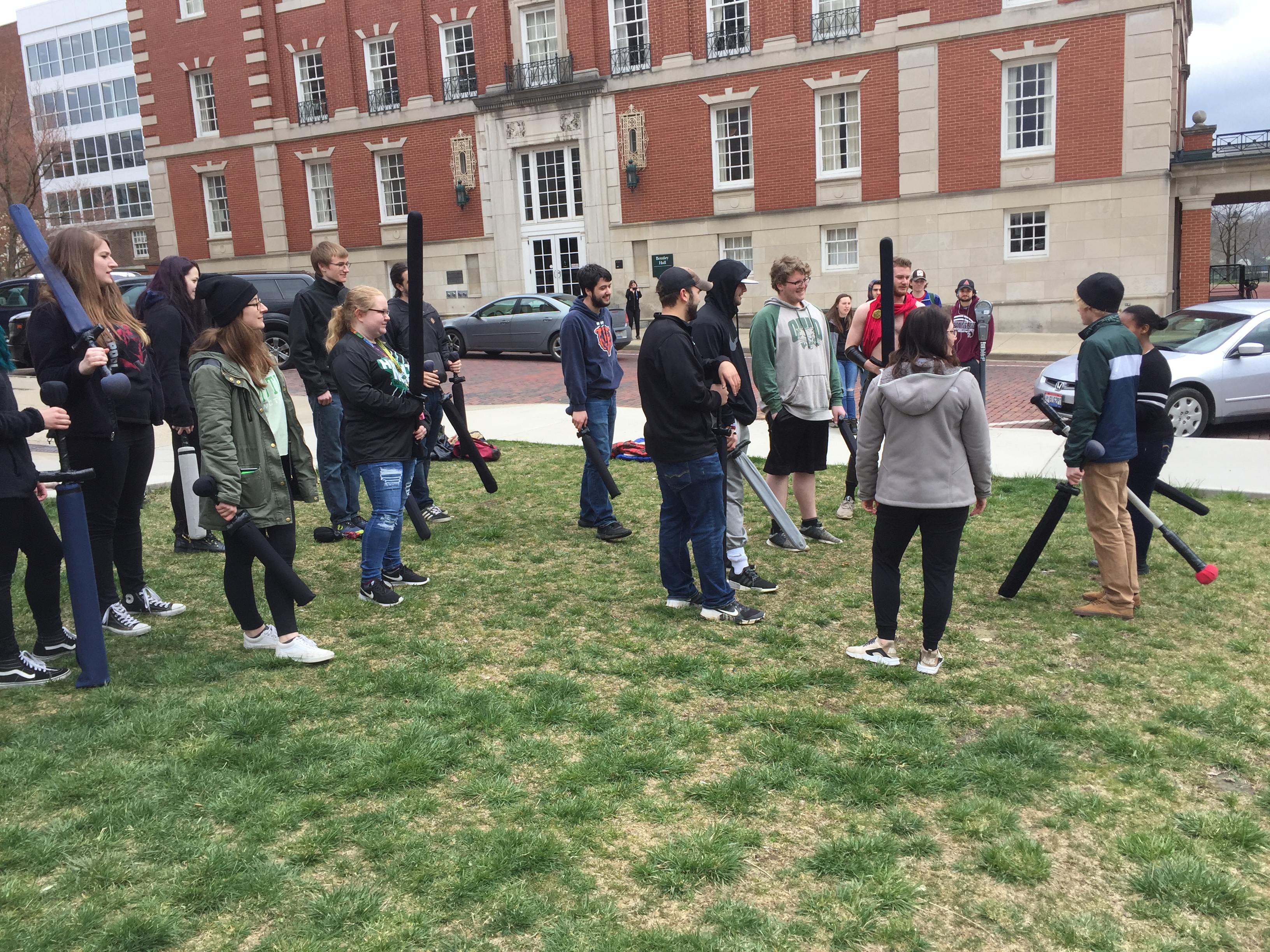 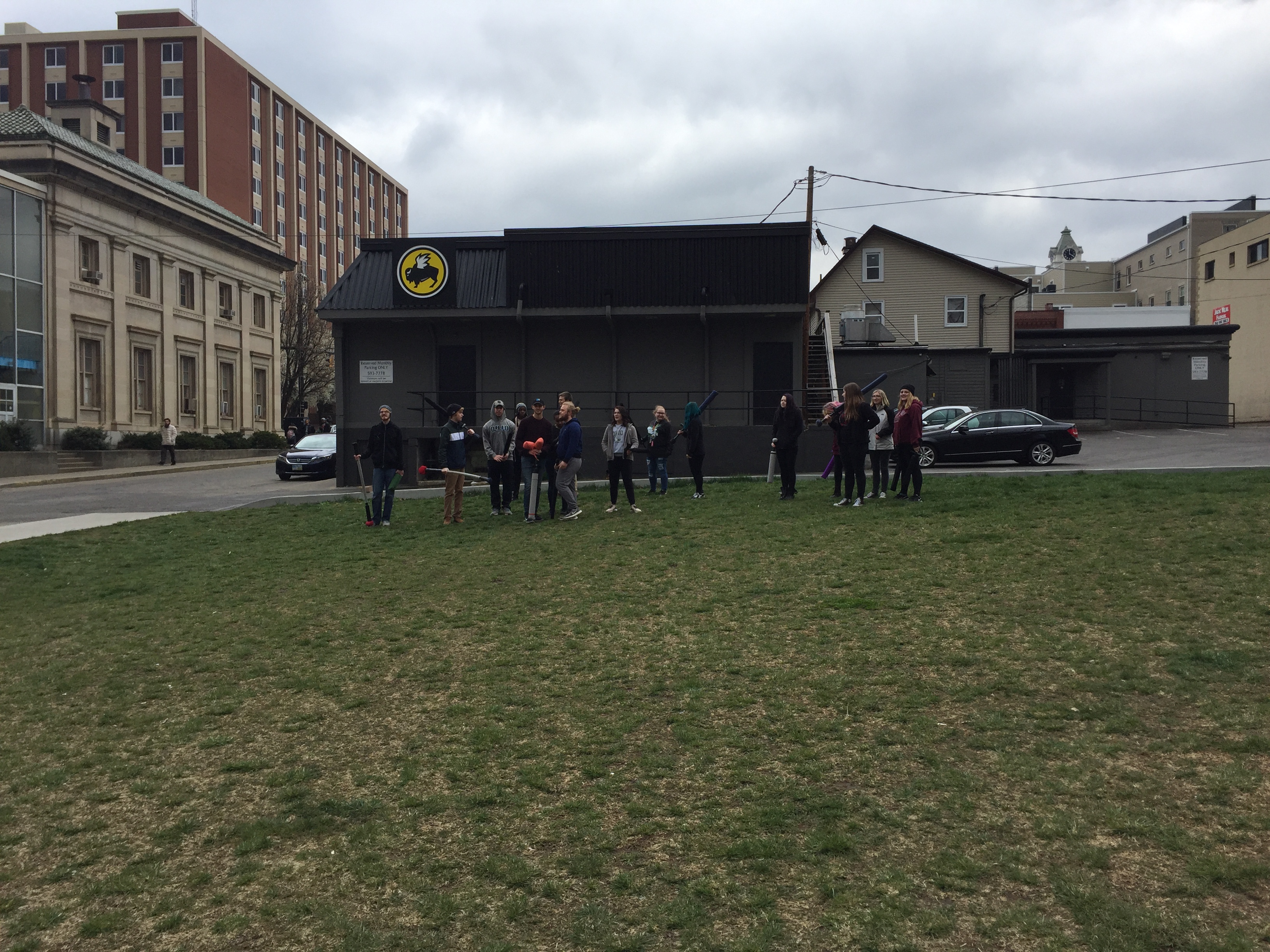 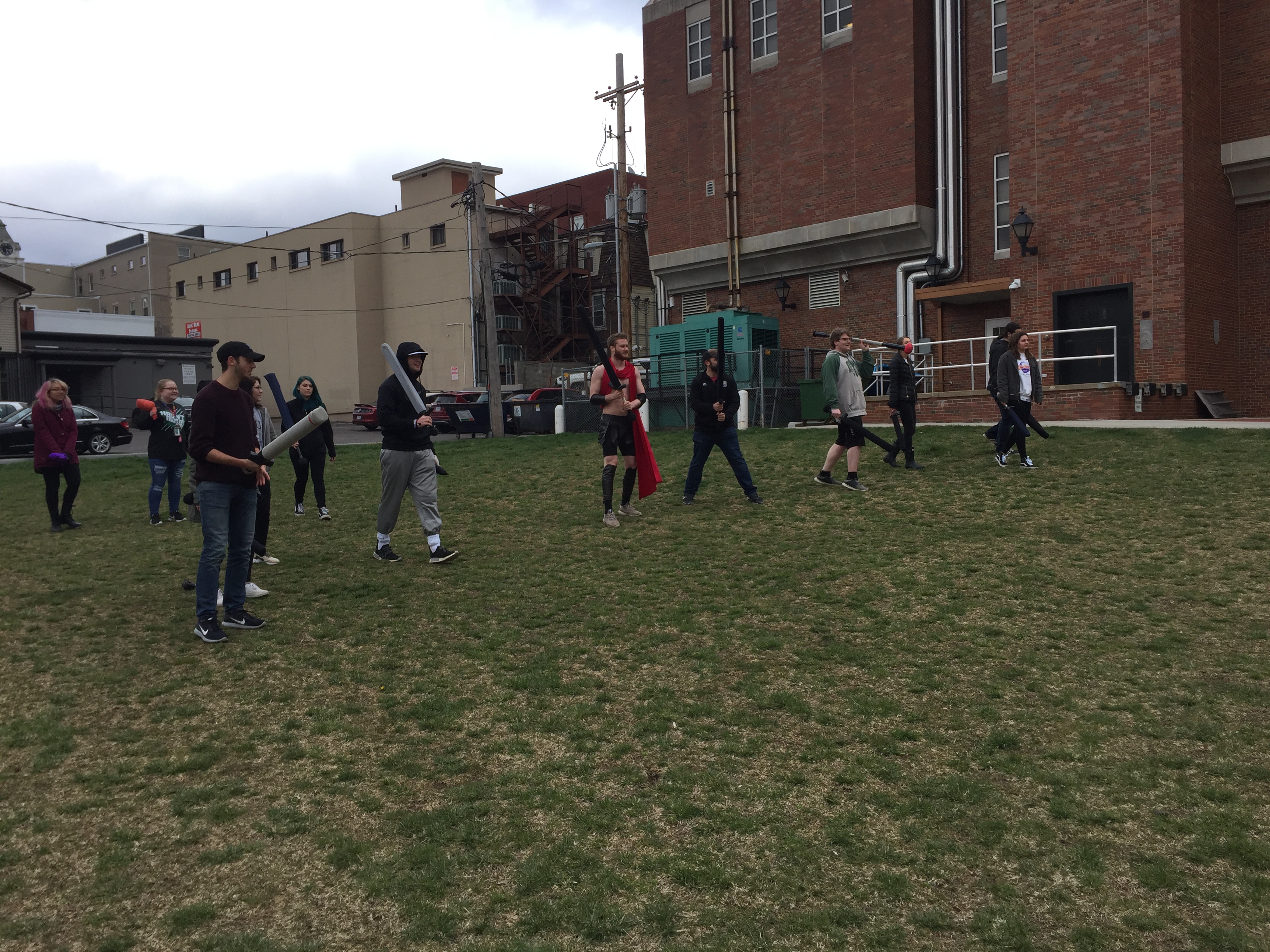 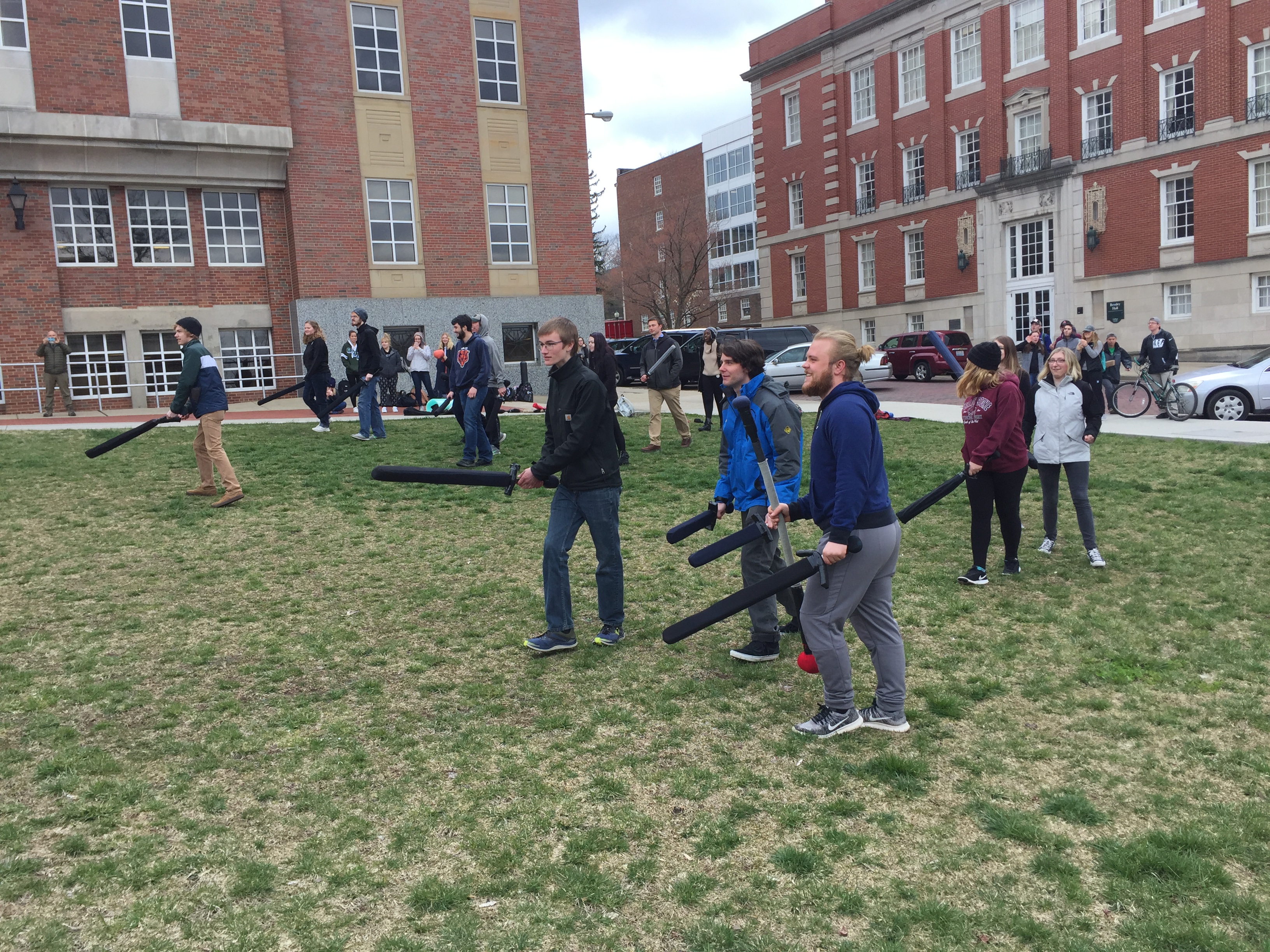 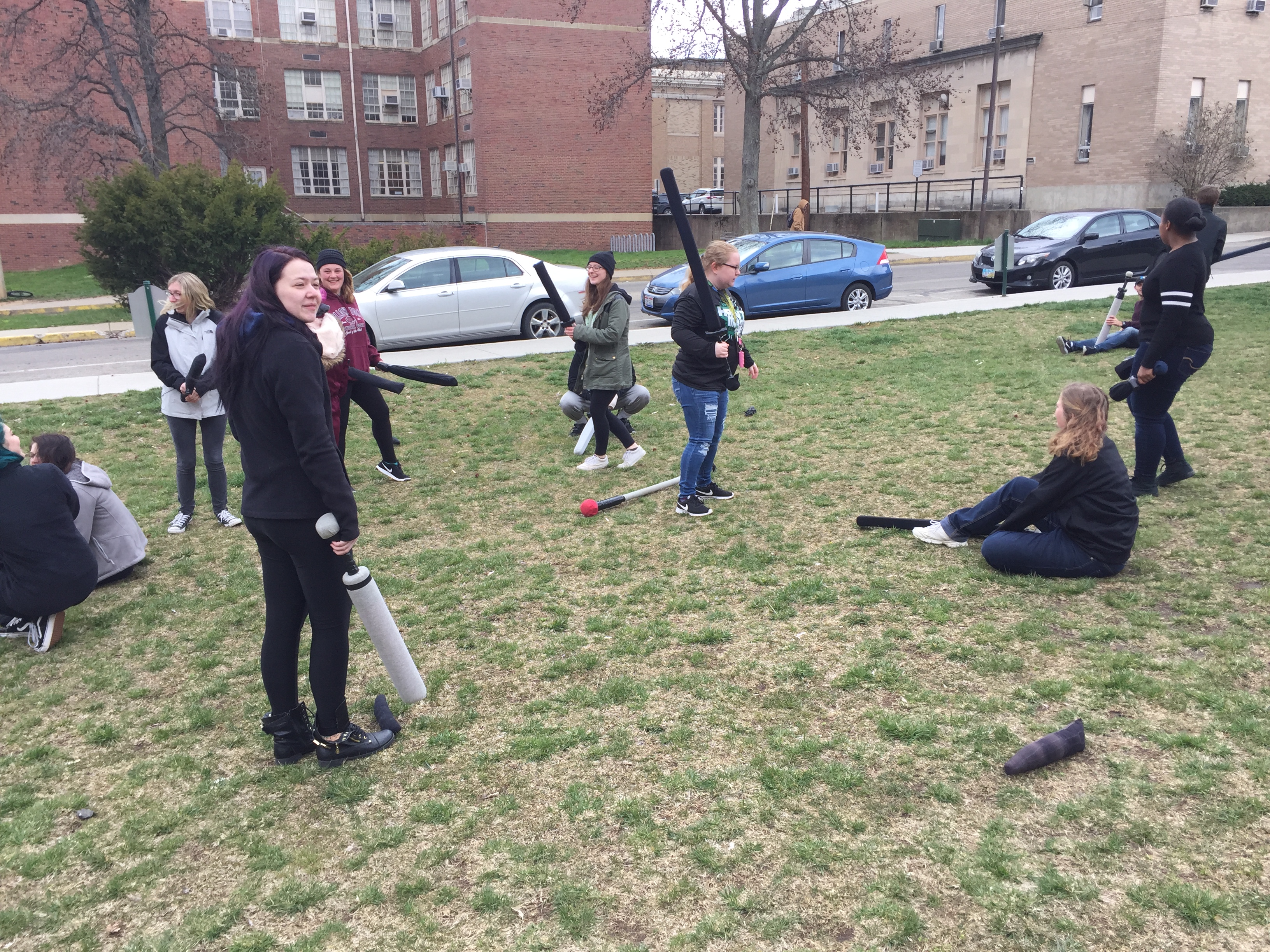