While I was a graduate student at the University of Washington, I was fortunate to fall in with and help create a group of video game players, scholars, and researchers called the Critical Gaming Project.  Out of the CGP, I started a Graduate Interest Group supported by the Simpson Center for the Humanities called Keywords for Video Game Studies, which ran for three years.  I am happy to announce that I have resurrected Keywords for Video Game studies (which one day I hope to turn into a book) at the University of Oregon as a speakers series.  It is important to me to create something, to share something, to bring something new or different or surprising (preferably all three) to every institution I am a part of, especially as a faculty member.  Last year, I brought a feminist, nerd burlesque show.  This year will be a speaker series on video games organized around three keywords: Diversity, Nature, and Violence.  Given my limited budget and time to organize the series, I called up on friends, colleagues, and relations to help. 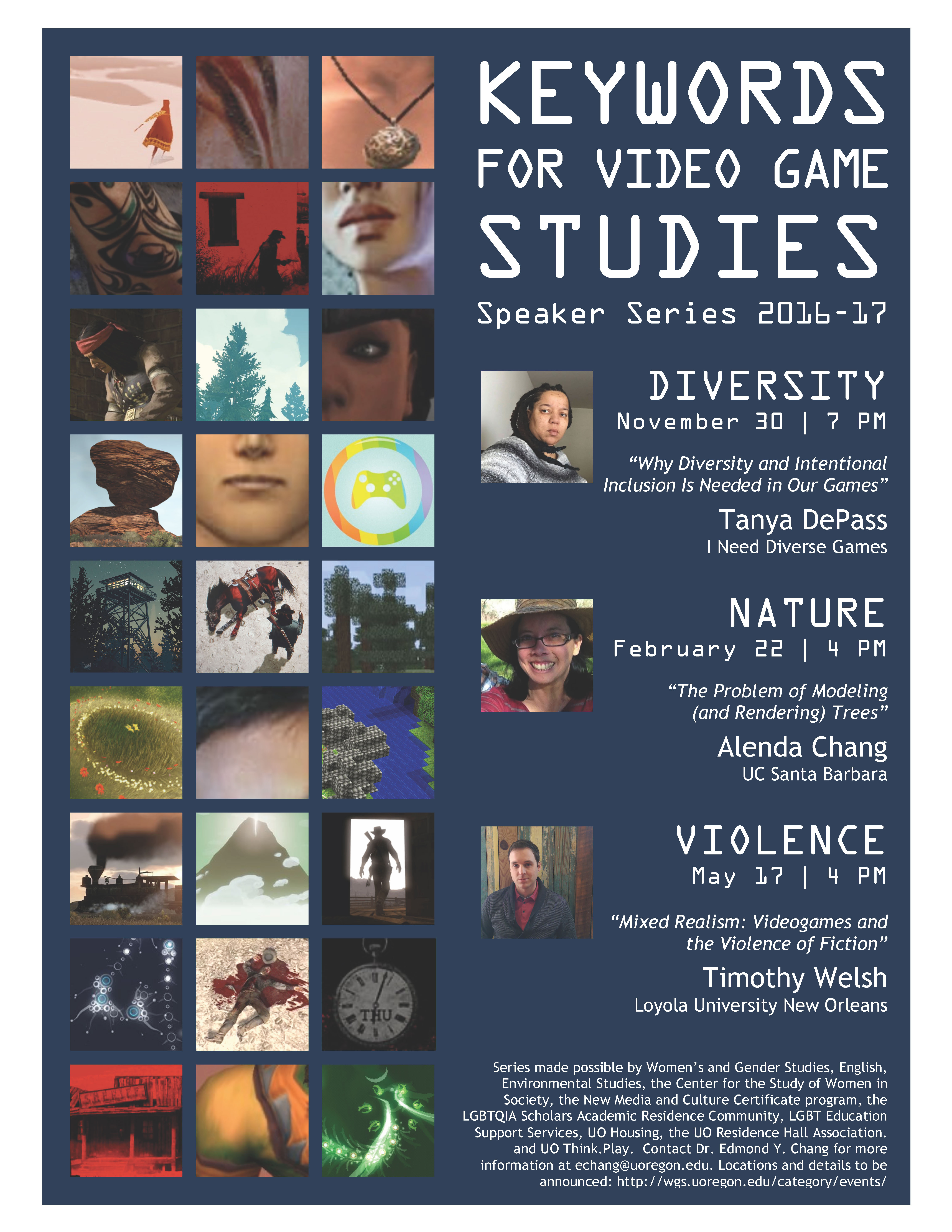 Here are the longer and fuller descriptions of each of the talks and the presenters:

AUTUMN 2016: DIVERSITY
“Why Diversity and Intentional Inclusion Is Needed in Our Games”
Tanya DePass

A brief talk followed by Q&A with students, staff and faculty on why diversity and inclusion in video games and tabletop is not just important but vital to keeping the genre alive. From Street Fighter to Mafia III, games are slowly getting better about who’s in the lead, who lives, who dies and who’s story is told; but it’s still moving at a snails pace. This talk will go into why representation is important for the player base that is not reflected in advertising, or who we see as the “industry” versus who is actually making, playing and researching games.  The history of why #INeedDiverseGames, where it started, where it’s going and why it’s important to bring diversity of race, gender, sexuality and ability to the table along with the latest killing everyone simulator will be threaded throughout the talk.

Tanya DePass is the founder and Director of I Need Diverse Games, a not-for-profit foundation based in Chicago, that is dedicated to better diversification of all aspects of gaming. She’s also the founder and Editor In Chief of Fresh Out of Tokens podcast where games culture is discussed and viewed through a lense of feminism, intersectionality and diversity. She’s also the Diversity Liaison for GaymerX and often speaks on issues of diversity, feminism, race, intersectionality and other topics at multiple conventions throughout the year. Her writing about games and games critique appears in Uncanny Magazine, Polygon, Wiscon Chronicles, Vice Gaming, Paste Games and other publications.

Can you commune with nature in a video game? The rise of so-called “walking simulator” games suggests that you can, even as games remain undertheorized as environmental systems. Ranging from first-person walkers, to plant modeling software and asset libraries, to gestural terraforming in virtual reality, this presentation will outline just a few of the ways in which the environmental humanities can contribute to the future of game studies.

Alenda Y. Chang is an Assistant Professor in Film and Media Studies at UC Santa Barbara. With a multidisciplinary background in biology, literature, and film, she specializes in merging ecocritical theory with the analysis of contemporary media. Her writing has recently been featured in Ant Spider Bee, Interdisciplinary Studies in Literature and Environment, and Qui Parle, and her current book project develops ecological frameworks for understanding and designing digital games. She also maintains the Growing Games blog as a resource for researchers in game and ecomedia studies and the environmental humanities.

Welsh presents arguments from his new book, which offers a fresh perspective on videogame violence by placing it in the context of the literary. His talk demonstrates his innovative critical methodology, “mixed realism,” through a comparison of Rockstar’s brutal anti-Western *Red Dead Redemption* and one of its obvious source texts, Cormac McCarthy’s *Blood Meridian.* In doing so, he suggest a way to “read” across the tenuous boundary between the fictional and the real in order to better understand the role of virtual environments in contemporary culture.

Timothy J. Welsh is an assistant professor of English at Loyola University New Orleans where he teaches in the Film + Digital Media concentration. His scholarly interests include digital media and culture, videogames, contemporary fiction, and critical theory. He is the web editor of the New Orleans Review. He has published on Grand Theft Auto: San Andreas, BioShock, Dante’s Inferno, and Call of Duty: Modern Warfare 2. His book, Mixed Realism: Videogames and the Violence of Fiction, is forthcoming this December 2016 from the University of Minnesota Press.