I am slated to two courses this coming Spring Quarter at the University of Oregon.  First, I will be teaching WGS 199: Gender and Popular Culture again but introducing a totally new class:

What does it mean to dress up?  We dress up to go to work, to go on a date, to work out, to impress, but what about dressing up to play?  This class will take up the ways we “present the self in everyday life” (to borrow Erving Goffman’s phrase) that reveal, challenge, and complicate norms about fashion, costume, and the roles we play.  In particular, we will look at the pop cultural treatment of subcultures of fashion, cosplay, drag, and live-action role-playing games to think about how “dressing up” intersects with race, gender, class, ability, space, and time.  Part of the course will focus on scholarship, film and other media, and everyday practices.  Part of the course will engage in observation, reflective writing, experiential learning, and actual live-action game play from basic mechanics to character creation to role-playing and adventuring.

My second class will be WGS 352: Gender and Literature: 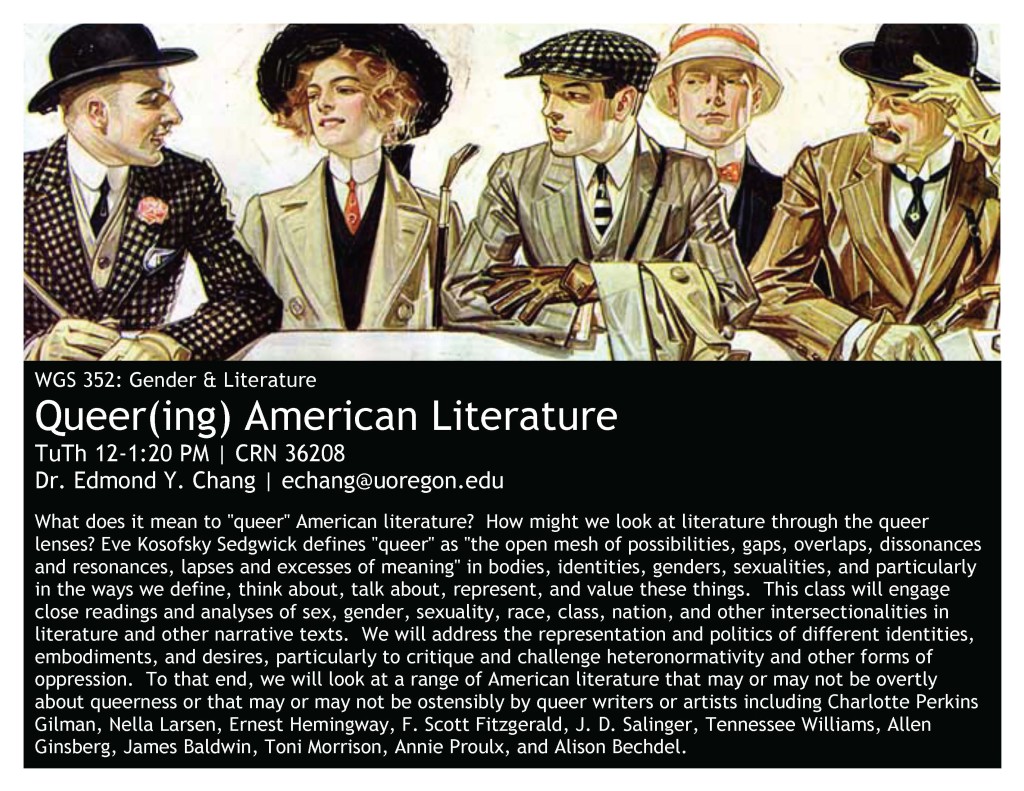 What does it mean to “queer” American literature? How might we look at literature through the queer lenses? Eve Kosofsky Sedgwick defines “queer” as “the open mesh of possibilities, gaps, overlaps, dissonances and resonances, lapses and excesses of meaning” in bodies, identities, genders, sexualities, and particularly in the ways we define, think about, talk about, represent, and value these things. This class will engage close readings and analyses of sex, gender, sexuality, race, class, nation, and other intersectionalities in literature and other narrative texts. We will address the representation and politics of different identities, embodiments, and desires, particularly to critique and challenge heteronormativity and other forms of oppression. To that end, we will look at a range of American literature that may or may not be overtly about queerness or that may or may not be ostensibly by queer writers or artists including Charlotte Perkins Gilman, Nella Larsen, Ernest Hemingway, F. Scott Fitzgerald, J. D. Salinger, Tennessee Williams, Allen Ginsberg, James Baldwin, Toni Morrison, Annie Proulx, and Alison Bechdel.