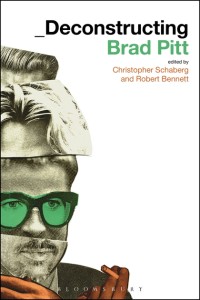 Sometimes there is just the right combination of serendipity, whim, magic, and mischief that results in an opportunity to mix professional and personal, academic and popular interests.  While attending the 27th Annual Meeting of the Society for Literature, Science, and the Arts (SLSA) last year at the University of Notre Dame, friends and I were chatting over post-session drinks and fellow scholar Christopher Schaberg (Loyola New Orleans) asked if I “worked on” Brad Pitt.  Not a question I usually get and not a topic exactly in my wheelhouse.  He said that my interests in gender, masculinity, sexuality, and pop culture seemed a natural fit and asked if I would be willing to contribute an essay to a book he was editing.  That book: _Deconstructing Brad Pitt.  Tongue in cheek aside, I agreed and yielded as the fruit of my labor an essay entitled “Gay for Brad,” which embraced some saucy fun and thoughtful theory.

I just returned the proofs for my chapter and look forward to seeing the whole collection live and in print.  _Deconstructing Brad Pitt is due out in September of this year and is thusly described:

The reactions evoked by images of and stories about Brad Pitt are many and wide-ranging: while one person might swoon or exclaim, another rolls his eyes or groans. How a single figure provokes such strong, often opposing emotions is a puzzle, one elegantly explored and perhaps even solved by _Deconstructing Brad Pitt.

Co-editors Christopher Schaberg and Robert Bennett have shaped a book that is not simply a multifaceted analysis of Brad Pitt as an actor and as a celebrity, but which is also a personal inquiry into how we are drawn to, turned on, or otherwise piqued by Pitt’s performances and personae. Written in accessible prose and culled from the expertise of scholars across different fields, _Deconstructing Brad Pitt lingers on this iconic actor and elucidates his powerful influence on contemporary culture.

Here is the table of contents:

11. A Star is Born
Andy Horton, University of Oklahoma

And here is the first paragraph of my potentially (in)famous essay:

“Who would you go gay for?” So asks the popular party game, truth- or- dare provocation. For self-identified straight men, the answer more often than not is Brad Pitt. Brad Pitt with a healthy side of “if I had to choose,” and “I’m straight-as-an-arrow but,” and “no homo” qualifying. A cursory online search reveals the prevalence of this straight- male- pattern- gayness, or this “Brad Pitt Theory.” From star athletes to politicians to celebrity heartthrobs to everyday dudes, everyone seems all too willing to jump Brad Pitt’s bones. According to On Top magazine, pun intended, singer Robbie Williams would go gay for Brad for free even. House- beat- thumping, body rocking, booty shaking, self-identified-49% homosexual, Williams says, “It’s 2 million pounds for Santa, but it’s a freebie for Brad Pitt.”But why specifi cally Pitt, and what bent logic makes men willingly heteroflexible? In other words, wherefore gay for Brad? Let us count the ways.