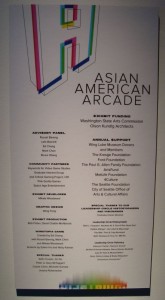 The exhibit is really lovely and mixes different media, games, image, text, and ideas.  For such a small collection, I think it does a good job of trying to address rather challenging questions and ideas.  When I first started with the project a year ago with then developer Joshua Heim (who has left the Wing Luke), we just started with a rough list of keywords that somehow evoked the intersection or interplay of “Asian American” and “video game” :

Then, when the new exhibit developer Mikala Woodward took over, she asked me to think about more specific ideas and concerns as a way to develop what kind of art and pieces would be appropriate and what the Call for Art would look like:

As a result, the exhibit gathered an array of pieces from an vintage Pac-Man arcade machine to drawing and painting to digital art to an array of games including Jenova Chen’s Flower and Peter Brinson and Kurosh ValaNejad’s Cat and the Coup. 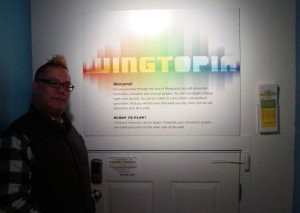 I really wanted to contribute something to the exhibit itself, to be part of the exhibit.  So, I proposed that we have some sort of game — a very simple alternate reality game (ARG) or live-action role-playing game (LARP) — for exhibit visitors to participate in while they moved through the space and interacted with the exhibition.  With the help of the Community Advisory Panel (which included fellow UW colleague Mark Chen), I created Wingtopia.  I knew that the game needed to be self-directed since there would not be anyone on staff to oversee it.  It would also have to have as few “moving parts” as possible.  The end game is a mixture of scavenger hunt, social LARP, and self-help magazine quiz with quests that ask players to explore the art and to role-play with each other.   The welcome to Wingtopia begins:

Welcome!  On your journey through the land of Wingtopia, you will encounter mysterious creatures and unusual people.  You will investigate strange sights and sounds.  You will be called to solve riddles and perform great feats.  And you will discover that what you say, think, and do will determine your life’s path.  Ready to play?  Choose a character card to begin.

MEI MEI: a bubbly, bubble-gum chewing, pink-haired, pig-tailed school girl with amazing powers and pretty skirts.
BLOSSOM LOTUS: a raven-haired, porcelain-faced woman wearing a kimono and carrying a fan, who walks with great poise and femininity.
ZIRO: a nimble, leather-clad, very cool young man with gravity-defying hair.  Rides a supersick motorcycle.  Armed with shiny throwing stars, nunchakus, and a katana.
S.W.O.R.D.: Strategic Weapon of Robotic Defense or SWORD is a robot with big legs and arms made from a shiny, unidentifiable metal.  A jet pack, currently nonfunctional, is on its back.
GUMMY: An old man with long gray hair and beard, wearing wooden sandals and a simple brown robe tied with a piece of frayed rope.  Smells of tea and feet.

Each character comes with a description of the character’s personality, special abilities, and list of quests.  The game asks players to engage the exhibit, asking them to think about different pieces, and to interact with other players and their characters.  Combat is represented simply by Rock-Paper-Scissors with a few twists thrown in since each character has a special weapon that may trump other throws.  (I will have to visit again because I really hope to get a chance to see the game in full action with lots of players.) 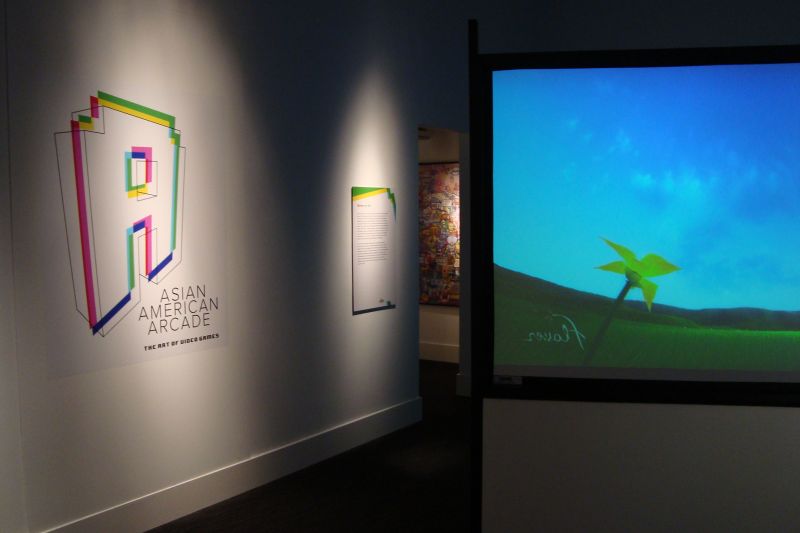 I am happy and proud.  Even though I did very little of the heavy lifting, the whole experience has been incredible and educational.  I hope that the exhibit is well-received, and I hope that people enjoy playing the gallery game.  Once again, I’d like to thank the Wing Luke Museum, the Exhibit Developer Mikala Woodward, the Community Advisory Panel, and all of the artists and supporters for the amazing experience seeing a exhibit come together from start to finish.