It took a while but I finally can write this up: I’m back from #KZOO2018 or otherwise known as the 53rd International Congress on Medieval Studies.  It was my first time attending the conference, my first time attending an all-medieval studies conferece, and my first time in Kalamazoo, MI.  Many thanks, again, to Dr. Ilan Mitchell-Smith (CSU Long Beach) who invited me to be a part of “Theorizing the Problematic Medievalisms of Dungeons & Dragons and Popular Fantasy Narratives (A Roundtable).”  The roundtable was in the format of a Dungeons and Dragons game.  I was the dungeon master and facilitator and the medieval scholars on the panel were the players and discussants.  Many thanks to my players Susan Aronstein (University of Wyoming) and Usha Vishnuvajjala (American University) and the “lucky” Kevin Moberly (Old Dominion University), who was convinced to join in at the last minute. 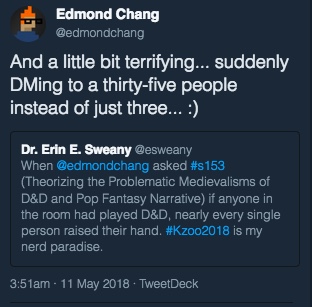 Truth be told, I was really nervous right before the session.  Though running a tabletop game is something that I have done for decades, this was the first time running a session during an academic conference and in front of a live audience.  The session was at 7:30 PM, and I hoped that the late hour would mean modest attendance.  I was wrong; the room was nearly full by the time we got underway (after a few minutes of struggling with the wifi).

Luckily, once I put on my great motley coat, it was easy to get into character and the roundtable went swimmingly.  There is a not-so-accidental synergy between being a game master and being a teacher: both roles in many ways profess, they explain, they frame, they facilitate, and they moderate. 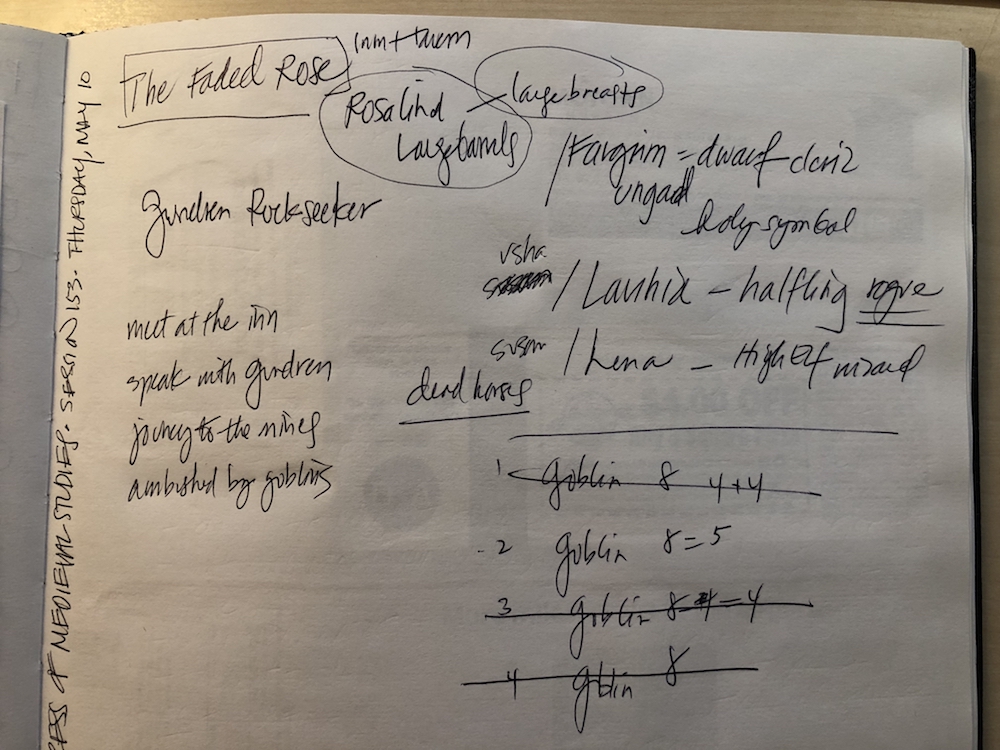 The basic premise of the adventure was based on the adventure included in the Starter Set for Dungeons and Dragons (5th Edition) called “Mines of Phandelver.”  The players would use premade characters included in the set.  One player played a high elf wizard (Susan), another played a halfling rogue (Usha), and the third played a dwarf cleric (Kevin).  I added to the front end of the adventure a scene in a tavern called The Faded Rose; there the adventurers would meet for the first time, get a chance to talk to each other, as well as encounter some of the tried and true stereotypes of medieval fantasy settings including the fantasy version of a “wild west saloon” and the busty, brassy, bawdy proprietess of the tavern, Rosalind Largebarrels.  At the tavern, the characters would meet their mutual friend and adventure hook, Gundren Rockseeker, a dwarf who “hires” them to help find lost treasure in the Mines of Phandelver.  Gundren directs the characters to drive the supply wagon he has arranged from the city to the camp near the mines.  He himself will go ahead to prepare the way.  After some shenanigans in the tavern, the adventurers get a good night’s rest and set out the next morning.  After a few days travel, as they turn off the main road, they are ambushed by goblins.  Again, the brief combat allowed the players to engage with fantasy race, violence, magic, religion, and the problems with D&D alignments. 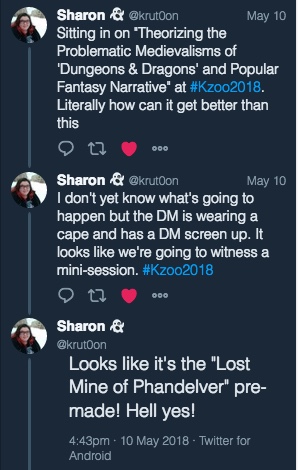 I only took a few scant notes (above) because much of what we were doing was extemporaneous.  But we would play about ten minutes, then have a discussion and Q&A with the audience, play another ten minutes, and so on.  It was a wonderful experience, and I wished we had more time to play and discuss more (so did a number of the audience members).  Here is a little video from the beginning of the adventure:

Once again, kudos to the panel, to the players, and to the supportive audience.  I think it would be a great idea to do an extended version of the roundtable with a few more players and more time to get at some key ideas and issues.  I worried that the session was not theoretical enough, but I think it did raise a number of good questions and served as a catalyst for conversation and future discussions.  I am glad to have been a part of the experiment and the conference as a whole.  Perhaps, one day, I will return to Kalamazoo.

Just in case, here is the Prezi for the session once again: