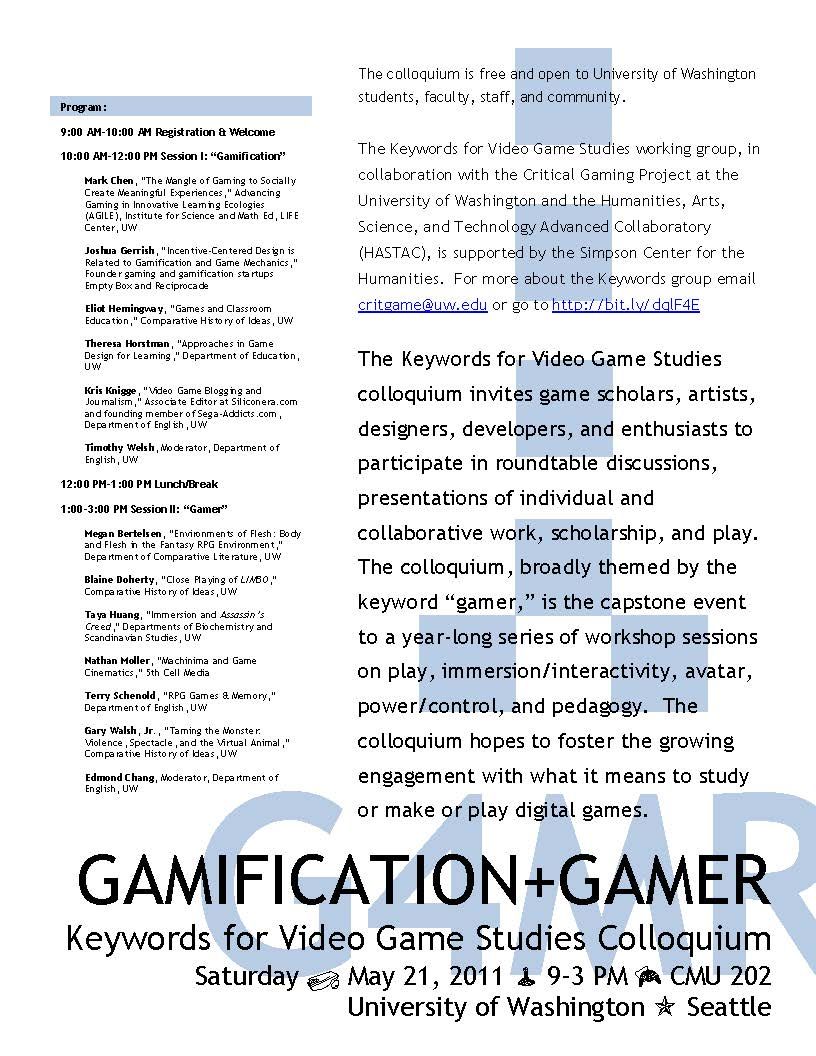 The morning session will engage the questions, issues, and challenges of game development, game commodification, and games as life.  How might scholars, teachers, writers, and developers think about the trend to gamify everything and the recent multi-billion dollar investment in gamification?  Gamification.org defines gamification as “the concept that you can apply the basic elements that make games fun and engaging to things that typically aren’t considered a game.  In theory you can apply Game Design to almost anything including Education, Health, Work and more.  Gamification at its core is about fun, rewards and social connections.  It has the opportunity to connect people in ways never seen before.”  What are the theories and possibilities of fun and games?  What are the critiques and problems of fun and games?

In “Growing Up Gamer,” researcher and designer Jane McGonigal says, “We cherish the time we’ve spent playing games.  We love what games give us the power to do.  We love who games give us the opportunity to become.  And with every additional generation that grows up playing games, there are more and more of us who see gaming as a way to have the best kinds of experiences, to make the best kinds of friendships and lifelong partnerships, to do the most amazing work, and to become the best possible version of ourselves.”  The afternoon session will engage video games and play, art, community, and cultural critique.  How might scholars, artists, developers, and players think about games as cultural artifact and popular culture?

Megan Bertelsen is a Master’s student with the Department of Comparative Literature, emphasizing media studies.  Prior to coming to the University of Washington, she worked primarily in horror and splash cinema, queer theory, and critical theory.  She is currently researching protocols and policing of identity production in sustained online gaming communities, particularly MMORPGs, as shaped by the interpenetration of the internal economies of these communities with more conventional iterations of the global economy.

Edmond Chang is a Ph.D. Candidate in English at the University of Washington.  He received his M.A. in English from the University of Maryland.  His main areas of interest are contemporary US fiction, technoculture, cultural studies, queer theory, teaching, role-playing games, video games, and popular culture.  His article “Gaming as Writing, Or, World of Warcraft as World of Wordcraft” was published in the Fall 2008 Computers & Composition Online.  He has taught at the university level for over twelve years and was the recipient of the UW Excellence in Teaching Award in 2009.

Mark Chen’s research focuses on teamwork, communication, and group expertise in situated gaming cultures. He received his Ph.D. from the University of Washington, looking at the practice of a specific group of gamers in the online game World of Warcraft.  He is currently a post-doctoral scholar at the UW Institute for Science and Mathematics Education, helping to evaluate player learning of science and math games such as Foldit and Refraction. He is a founding member of Advancing Gaming in Innovative Learning Ecologies (AGILE).  You can read more about Mark on his blog at http://markdangerchen.net

Blaine Doherty is a student in the Comparative History of Ideas (CHID) at the University of Washington.

Joshua Gerrish is a recent University of Michigan School of Information graduate, where he specialized in Incentive-Centered Design and Social Computing.  Previous to this, he earned a Bachelor’s degree in Cognitive Science.  He is currently the founder and principal software engineer of a location-based gaming and consulting startup in Seattle, Empty Box LLC (also DBA Reciprocade).  Josh is interested in the intersection between technological and social systems, and the amazing possibilities that open up when you begin designing and building systems with people in mind.

Eliot Hemingway is a senior undergraduate student with a longtime interest in methods of learning.  He has been a gamer for over a decade and has brought that passion and perspective into his educational experience.  Eliot has facilitated three CGP-affiliated focus groups under the CHID program (Actions Speak Louder, The Ninja Matters, and Challenging Forth).

Theresa Horstman is a doctoral student in Learning Sciences at the University of Washington.  She received her B.A. with a focus in philosophy from The Evergreen State College and her M.Ed. from the University of Washington.  Her interests include comparative analysis of video game and e-learning design methodologies and the correlation between the metaphoric process and creative process in designing instruction for virtual environments.

Taya Huang is a UW student aiming to double major in Biochemistry and Scandinavian Studies.  She is also an art student at Gage Academy of Art.  She is learning 3D modeling and whether she will model proteins or human figures or bones, she doesn’t yet know.

Kris Knigge is a sophomore majoring in English at UW.  He is also the Associate Editor at Siliconera.com and founding member of Sega-Addicts.com.

After working in the New York film and television industries, and then some award-winning work in the machinima medium, Nathan Moller joined BioWare and helped ship Mass Effect, Mass Effect: Bring Down the Sky, Dragon Age: Origins, Mass Effect 2, and the upcoming Star Wars: The Old Republic.  He now works for 5th Cell Media, the creators of Drawn to Life and Scribblenauts, in Bellevue, WA.

Terry Schenold is a Ph.D. candidate in English writing his dissertation “Reading and Reflection in the Novel and New Media,” which includes an exploration of digital roleplaying games as the best potential analog to literary media, as instruments for reflection, within the emerging digital media ecology.  He has taught several classes on digital games, most notably the seminar “Poetics of Play in Digital Roleplaying Games.”  He is also the founding member of the Critical Gaming Project.  His specific research interests in the field of game studies include ergodicity and narrative, all things having to do with time, sources of “immersion,” and comparative configurations of imaginative work in different game media.

Gary Walsh, Jr. is a UW senior majoring in Comparative History of Ideas with a minor in Anthropology.  He is also a humanities and writing tutor at Seattle Central Community College.  His research focus is on cultural authenticity, identity, and representation in relation to the commodity form.  Currently he is working on his senior thesis which examines my relationship to Japanese popular culture and how Japanese cultural productions are utilized in the construction of cosplay identities (individuals which dress as anime, manga, videogame characters) and the identities of American tourists in Japan.

Timothy J. Welsh is a Ph.D. Candidate in English at the University of Washington studying Twentieth Century US fiction and new media.  He received an M.Ed. from the University of Notre Dame while volunteer teaching at St. Louis High School in Louisiana, before completing an M.A. in English at Washington.  A version of his MA essay, “Everyday Play: Cruising for Leisure in San Andreas,” appears in the collection The Meaning and Culture of Grand Theft Auto.  His research interests include postmodern fiction, literary theory, contemporary art, digital media, and video games.  He is currently completing a dissertation entitled, “Immersive Fictions: Modern Narrative, New Media, Mixed Reality,” in which he reads contemporary novels in conjunction with popular video games to develop an approach to narrative media that responds to the expanded role of digital environments in contemporary life.