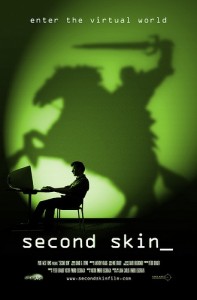 I just watched Juan Carlos Pineiro-Escoriaza’s 2008 documentary Second Skin (touted at SXSW and as the first widely released film about virtual worlds), and I must admit that my overall response is ambivalent.  The film follows a group of MMORPG players, mostly World of Warcraft and EverQuest 2, their trials and tribulations, and attempts to articulate “something” about the nettling tensions of terms like “real world” and “virtual world.”

First and foremost, the film follows the now fashionable and almost de rigeur indie documentary trend of uncovering the secret lives of nerds, geeks, dorks, and freaks (cf. King of Kong, Monster Camp, Darkon, Ringers, and as far back as Trekkies).  I will support the projects, of course, but I do think that many of these films, Second Skin included, aren’t quite sure about what they’re trying to do, trying to argue.  The film has been met with unbridled popularity and acclaim–I think mostly due to the fact that it is about a population that gets very little attention much less media coverage.  Some representation, albeit problematic, is better than no representation at all–so it seems.  Moreover, there is the feeling of finally being “in” and “cool” and that though the film is marketed toward a “general” audience, there is the doublefold sense that almost everyone is a “gamer” or at least understands the double-life of being online and that those who are “hardcore” gamers are sharing in some sort of inside joke, insider commentary, and imagined community.